Posted on August 18, 2014 by elizabethbumpas

It’s been a few weeks since my last blog post. It doesn’t seem that long ago but time is going by so fast.  I’ve been here almost three months.  It feels more like 6 months.  Sandra and I were running errands in town last Friday afternoon and I realized that I was no longer in “sight seeing” mode.  Life is becoming normal and routine.  I’m still adjusting but I think the newness of being here is fading.

During August all the schools in Uganda go on break for a month, include the theological college.  All of the Diploma/Certificate students left last week after finishing their exams. They have returned to their home churches to get some experience over the next few months.  They will not return until the January term begins. The Women’s Development Center (WDC) is also on break.  The Diocesan campus is so quiet.  I miss the students and the young girls of the WDC…the girls especially bring life to the campus.  I’ll be glad when they return.

The next class of students at the college will be the Layreaders course which begins in September and goes through November.  Layreaders have a very different role here in Uganda than in the US.  In the US, a layreader is a lay person who reads the Scripture during worship services.  In Uganda, a Layreader is the leader of a sub-parish church.  Many sub-parishes do not have a full time priest.  So the church is run by a layreader.  This person leads services, preaches and prepares parishioners for baptism and confimation.  The parish priest in charge of the sub-parish church comes to the church about once a month or so and leads a communion service.  Layreaders get paid next to nothing and it’s usually in addition to running a family business or attending a large garden.  Sometimes Layreaders go for formal training to become ordained.  They make huge sacrifices by attending the training at the college because they must leave their families, their businesses, their gardens, etc. for three months.  It is also a financial burden for them as well.  Many struggle to pay the fees to attend the course.  The course is taught in Luo, not in English.  These students have very little English.  Therefore, I will not be teaching or assisting with the Layreaders course. I hope to begin teaching a class in January. Until then, I will continue to assist with the bookkeeping at the college.

For the next few months I’ll be focusing on growing in my responsibilities as the Bishop’s Asst. for International Relations.  I have been asked to work on the yearly publication put out by the Diocese which shares all that has been accomplished in the ministry in the last twelve months. It goes to press in December and will be released in January 2015.   This will be a good way for me to learn about all the various programs of the Diocese and their current needs.  The magazine will be geared toward current partners of the Diocese and also future potential partners.

Last Monday I attended a celebration at Agung Parish, where the first missionaries knelt

and prayed and where the Acholi people first heard the gospel.  It was the 111th anniversary of this great event.  The Bishop confirmed about 20 people and there was also a mass wedding…which was so much fun to witness.  Twenty couples said their I do’s. 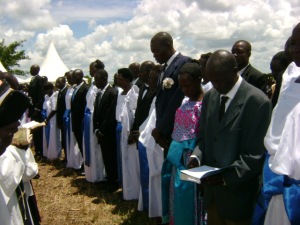 All the couples line up to say their vows.

Many of the couples were quite old and had already been living together as husband and wife in a traditional marriage but had not been married in the church.  In Uganda, many people still practice polygamy.  Some men have two or even three wives.  The church has struggled to break this cultural tradition but more and more of the people are realizing that in order to live right before God they must be married in the church and have only one wife.  There was some drama as the couples gathered to say their vows.  The Bishop asked if there was anyone who had an objection to any of the couples being married and one woman came forward claiming she was the second wife of one of the grooms.  Apparently one of the grooms had two wives, both of whom had children by him.  He could only choose one to marry in the church. The second wife could produce no evidence that she was legally married to the man so the wedding went forward.  I felt quite sad for this other woman.  It’s a difficult issue.  The man will still provide for the children of the second wife but he chose the first wife to marry in the church.  After the issue was settled the weddings proceeded.  There was a priest present for each couple who led them in saying their vows.  Afterward there was a lot of celebration.

Another highlight of the event was something that I believe was spontaneous. 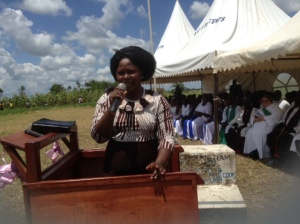 I don’t think it was planned.  There were two witch doctors there who had recently converted to Christianity.  They both gave their testimony but one was especially powerful. One was a man who appeared to be in his 30’s.  He was a consultant to witch doctors.  In other words, all other witch doctors came to him to learn.  The other was a young 24 year old woman who had given her life to Christ just three months earlier. Her testimony was quite compelling and moving.  He family has disowned her for leaving witchcraft. They forced her into it from an early age.  She made as much as Ush 800,000 per day as a witch doctor.  That’s a lot of money…equivalent to about $300/day…a lot for most Americans even.  The average Ugandan in the Gulu area or in the north makes about Ush 12,000 per day…or about $5/day.  She gave up all that money and left that lucrative but evil lifestyle to follow Jesus.  She decided to convert when she was told she must sacrifice her baby.  She could not go through with it. 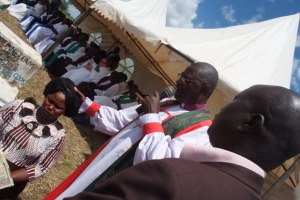 Her family has disowned her.  However, she has already brought three other witch doctors to Christ.  The Bishop believes she has a gift for evangelism and is helping her to find a home in Gulu so she can be with people who can disciple her.  Her name is Evelyn.  Now, some of you reading this don’t believe in demonic forces that work in this way…but it’s a spiritual reality. I mean…it’s not hard to see demonic forces at work in the world…obvious examples like ISIS in Iraq and Boka Haram in Nigeria come to mind.  Anyway, praise God for what He is doing in this young girl’s life.

Yesterday I visited The Father’s House, the orphanage run by the Cathedral of the Diocese.  I was there in an official capacity…to take photos of a group of Canadian High School teachers who were visiting and making food donations to the orphanage.  They also

The house mothers of The Father’s House orphanage

brought jerseys for the Cathedral soccer team.  The children were not there as they too take a break during the month of August and spend with their guardians back in their home villages.  The orphanage currently has 44 children ranging in age from 6-14.  I’ll share more about The Father’s House in another post.

Personally I am doing well.  I started my fourth round of oral chemo and continue to have no side affects.  I’m like a sponge…continuing to soak up all I can of the culture and the workings of the Diocese.  There are many challenges the people face daily but I am amazed at their resilience.  Tomorrow I begin language lessons.  I hope to learn how to have a basic conversation in Luo.  Never say never…I can’t believe I’m going to try to learn an African tribal language.  This may sound wimpy…but the hardest part about being here is doing my laundry by hand.  It’s really hard work!  This simplified life I’m living has made me determined to downsize when the Lord sees fit to call me back home to the states.  I like all those tiny houses I see on Facebook…200 sq ft. trailers you can move anywhere.  Of course, it has to be big enough for both me and my sweet Daisy.  What’s a miniature house without a miniature dachshund, right?!

Must go now.  It’s time for my cold shower before bed, which is really not bad at all.  In fact…I’m seeing just how easy it is to live without hot water.

Thanks for your continued prayers! Blessings!

This entry was posted in Uncategorized. Bookmark the permalink.